Only in Israel moment...

In shul today 2 on-duty soldiers came in for their Aliyah. One guy had the huge radio pack on his back with the antenna rising about a foot over his head. Rather than taking it off and then having to put it back on, they simply draped the Tallit over him, radio and all. So all we could see in a sea of white Tallitot was an orange beret and a black radio antenna....
Posted by Pesky Settler at 9:17 PM 1 comment: 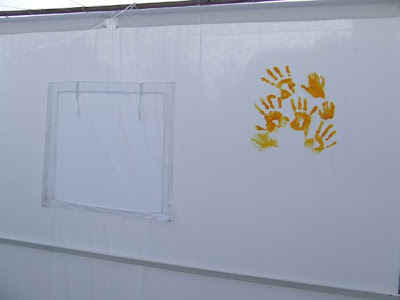 Inspired by the ideas in A Mother In Israel's post about decorating the walls of the Sukkah I decided on a plan for at least one of the plain white walls of our own cloth Sukkah. After staring at them for 4 or 5 years and mulling over one idea after another (one idea was to paint the 7 species of Israel onto part of a panel, another idea was an Ushpizen-inspired mural) I hit upon a plan with the help of the ideas in the post.

So right now, one panel sports the yellow hand prints (and smudges that goes along with having a 3 year old) of the Pesky household in a vague sun-like shape.

Each year we'll be adding to the mural and b'Ezrat Hashem (God's Will) we'll add more hand prints as the Pesky family expands to sons- and daughters-in-law and grandchildren.
Posted by Pesky Settler at 7:36 AM 2 comments:

One of the saddest posts I've seen

The following has got to be one of the saddest posts I've seen in a long time on Imamother.

My 12 year old Charedi daughter came in to me this evening and asked me if husbands and wives are allowed to hug and kiss. Turns out she was standing on our porch and speaking with her friend who lives 2 floors down. The apartment directly under us has a newly married couple living in it. Their blinds were completely open and dd watched for a few minutes while the couple made out on the couch. Obviously I'll never know just how much she saw but she was in total shock that this couple were "behaving like chilonim" and she was nauseous over the whole thing. Needless to say, my dd is very sheltered and could not imagine that anyone Charedi would do something so disgusting!

I am curious about how Charedi (Litvish or Chassidish) mothers would deal with this.
FS -What do you think?

I probably made the biggest mistake of my life and told her that husbands and wives can do that but that it's not tznius to have the windows open. She was not happy with that answer and of course, started to ask me about her father and myself I didn't give her a straight answer but I did let her know that it's normal and natural.
When DH found this out he was not a happy camper. He would rather have her think that the neighbors are pervs or something. Oy.

I'm not sure which is sadder... that the girl, at 12, still thinks intimacy in marriage is something only non-religious people do, that she has never seen her own parents even hug, that the mother thinks TELLING THE TRUTH might have been a mistake or that the father would rather his daughter think intimacy is perverted....
Posted by Pesky Settler at 7:01 AM No comments:

First issue: Do I be honest and tell the teachers that NS really isn't toilet trained and risk them telling me they won't accept him?

Second issue: Looking at the calendar, I can either send him starting Sept. 12th, right after Rosh Hashana. He'd then have 5 days of school, be off Friday, Sept. 17th since Yom Kippur starts and then he'll go to school Sept. 19th - 21st. and then he's off until October 3rd because of Sukkot.

So that means my non-toilet trained son will have a grand total of 8 days in nursery.

Or do I keep him home until after all the holidays and hope that in that time either he'll become completely toilet trained or at least a lot better at it....
Posted by Pesky Settler at 11:54 PM 5 comments:

My 3 year old is still fighting the toilet training.

He'll sit to pee with little problems but pooping is a whole 'nother story.

He should be toilet trained before he starts school and today I'm registering him for nursery. I'll keep him home tomorrow and Tuesday (since they'll start vacation on Wednesday) so I'll have an extra week to get him to sit on the toilet but honestly, I'm not hopeful.

I'll talk to the teachers for their advice but I'm not sure what to do.

Send him in a diaper where he'll spend a chunk of the day in a dirty, smelly diaper? Send him in underwear he refuses to wear and send 6 changes of clothes?

I did the smart thing and started cooking and freezing for Rosh Hashana last week.

August 15th I went to the Misrad haChinuch (Board of Ed) to finally sign my 3 year old up for nursery. I was told that all the dati (religious) gannim (preschools) were full and why did I wait so long to register him. I was told I should either put him in the secular gan (which is right across the street from us) or wait until after the holidays and usually spots open up.

First of all, it's not really your business. Pretend I just moved here.

Second of all... it is my legal right to send my kid to public gan and the Mishrad haChinuch is obligated to accommodate me.

Third... I don't want to send my child to the secular gan, even though it's so much more convenient to me than the religious ones. While I have no problem with my son having secular friends, I think the Kashrut issue would be too much of a problem in the Gan. YOU try telling a 3 year old not to eat someone else's sandwich or pre-cut apple.

Thursday night (school started Wednesday), hubby and I were eating at one of the local restaurants and one of the nursery teachers who also Davens at the same shul asked what we were doing with our 3 year old. I told her I'd been told there was no room and she said that was baloney. At least 3 spots were open in the nursery I wanted to send the 3 year old to and another 3 spots opened in the other nursery.

So today, once the 1 1/2 year old wakes from his nap, we'll go to the Misrad haChinuch and get him into nursery.

When I was first told about the no room in Gan problem, I contacted two people responsible for getting people to move to Ariel.... the problem isn't just about finding one spot for my son, but for spots for future residents. The sooner they get the problem fixed, the better off everyone is.
Posted by Pesky Settler at 8:25 AM No comments: