Last week I did a system reinstall and when I downloaded and installed FireFox (my default browser of choice) I started getting crashes. I think I narrowed it down to a Flash issue but I couldn't find a fix. Even downloading an older version of Firefox didn't help.

So I've now moved over to Chrome.

Thanks to XMarks (xmarks.com) all my bookmarks came with me with no fuss (well, almost no fuss. Unfortunately they alphabetize the bookmarks to I have to get used to the new order of things).

Now i just have to get used to the new interface.

Well, I'm off to the doctor.
Posted by Pesky Settler at 8:11 AM No comments: 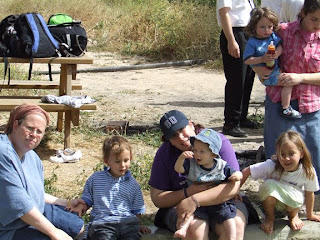 At the ma'ayan near Har Bracha (I'm sitting at the far left. The next 3 kids are mine. The little girl isn't). (we also went to Tel Shilo but we didn't take pictures :( ) 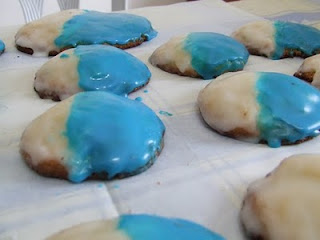 Dessert.
Posted by Pesky Settler at 7:51 AM No comments:

Posted by Pesky Settler at 4:27 PM No comments:

So this video has started making its way around the internet. I don't have a TV or listen to the radio but I'm sure it's been played.

The message is nice and timely.

The only thing that leaves a poor taste in my mouth is the only women singing are part of a larger choir. I know, I get it, 'kol Isha'. But I also understand that there are acceptable Psakim that say recorded voice is exempt. Or having three or more women singing together is also fine.
Posted by Pesky Settler at 6:58 AM No comments:

Rethinking getting stuff from the US

My parents are making arrangements to visit us for a little bit the end of June.

My almost 18 year old has been looking at getting a netbook and we'd been planning on having my parents bring it from the US.

But with Israeli customs confiscating American iPads (http://edition.cnn.com/2010/TECH/04/15/israel.ipads/index.html) claiming it doesn't conform to israeli Wi-Fi standards, I wonder if having my parents bring in a netbook will have the same problems.

Does anyone know? Does someone know who I can call to find out?
Posted by Pesky Settler at 3:33 PM No comments:

Newest Kosher Cooking Carnival is now up!
Posted by Pesky Settler at 3:29 PM No comments:

They came out SOOOOOOOOOOO good. I made a pizza-type tomato sauce for dipping and it became a whole meal. Warning though... they are NOT that good room-temp or cold. The cheese really needs to be gooey.

Combine the oats, whole wheat flour, red chilly flakes, flax seeds,dry parsley leaves, pepper powder in a large bowl..meanwhile in a cup of lukewarm water, add the active dry yeast, sugar and salt and let this mixture sit for 5 minutes, to get a foamy yeast...Add this foamy yeast ,olive oil and spinach puree to the flour and spice mixture and knead as dough until you get a soft and smooth dough..arrange this soft dough in a greased bowl and keep this bowl in a warm place for an hour with lid closed until the dough double their volume..

Preheat the oven to 350f..After an hour, knead the dough,dust with all purpose flour and divide them 8 medium sized balls...knead the balls one by one, flatten them with ur palms, place a babybel cheese ,bring the edges together and roll them as round buns, arrange the cheese stuffed buns over a baking sheet lined over a baking tray..bake these cheese stuffed buns for 25-30minutes until the crust turns golden brown..

Read more: http://priyaeasyntastyrecipes.blogspot.com/2010/03/stuffed-cheese-spinach-oats-buns.html#ixzz0ktNTTBt7
Posted by Pesky Settler at 10:37 AM 1 comment:

Once again, we have to opportunity to visit the Kvarim of Yehoshua ben Nun, his father Nun and Calev ben Yephuneh.

I make Challah on a regular basis, all by hand. I love the feel of the wet and dry ingredients as they come together. The velvety feel of the sifted flour, the creaminess of the beaten eggs and oil. The satiny smooth texture of dough perfectly balanced in sticky to dry. And the smell... oh... the smell of the yeast gives my Shabbat kitchen just the right earthiness. And when I'm ready to punch down the dough, the first and second time... I put my ear to the huge mass and listen to Hashem's [God] creation at work as the yeast interacts with all the other ingredients as it pops and crackles.

And then... just when I think my appreciation for Hashem's creation can't get any better... I get to make a bracha! On dough! I get brownie points (pun intended) for doing something as basic as baking!

Now, with regards to the Schlissel Challah (Key Challah) it's a segulah [lit. virtue] for wealth and a happy home. often people will bake the key to their front door into the challah.

2. According to Kabbalah on Pesach the gates to heaven were open, and following Pesach the lower gates are shut, and it's up to us to open them again, therefor on the 1st Shabbat we put the key on the challah to show that through the mitzvah of Shabbat we are opening the locks [original source?].

3. In the desert the Jewish people ate from the manna until after Pesach upon entering the land (with the bringing of the Omer, see: Josh. 5:11), at which point the ate from the produce of the land, and became dependent on their livelihood for the first time (now they had no manna). The key in the challah after Pesach is a request the God should open the Sha'arei Parnasah (gates of livelihood). Alternatively, the manna began to fall in the month of Iyyar, and this Shabbat is always Shabbat Mevarchim Iyyar.

And as far as knowing if it has worked for anyone? Who knows... when I get a Bracha from Hashem, I have no way of knowing WHY I received it. I just thank Him that did.
Posted by Pesky Settler at 10:03 AM No comments: