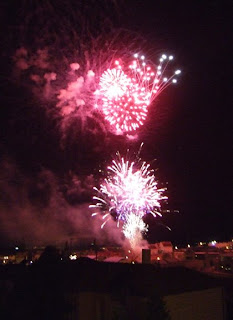 Despite our enemies' (and at times, our own) efforts, Israel has made it to 61 years of Statehood. Here's to the next 61. May it be more peaceful than the last 61 years. 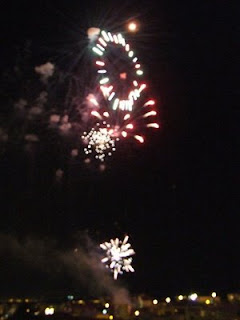 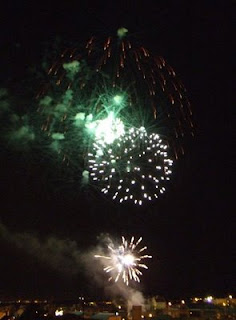 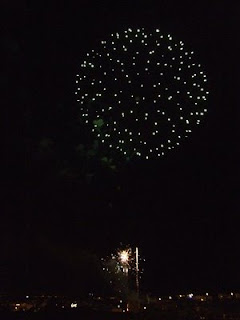 Posted by Pesky Settler at 11:50 AM No comments:

Almost every year, on 26 Nissan, the Army puts the town of Kifl Hareth under curfew to allow Jews to daven at the Kevarim (graves) of Yehoshua (Joshua) ben Nun, Calev (Caleb) ben Yefuneh and Nun himself. Until this year, Jews were admitted to the town from midnight until 4 a.m. or so. This year, the Army extended it from 10 p.m. until 4:30 a.m. Although they didn't actually allow people to start going into the town to walk to the Kevarim until 10:30 or so (and from the entrance it was about 20 minutes to walk to the Kevarim).

I live in Ariel, which you can see by this map is just across the road from Kifl Hareth. Many people from Ariel, including a group of us 'Anglos' went to daven. Buses were arranged from all over (I met with a group from Elkana and I know there was at least one carload of people from Ramat Beit Shemesh) and throughout the night and early morning, thousands of Jews took this once a year opportunity to visit the Kevarim. Throughout the town, we had groups of soldiers on guard, to make sure no one started anything (between the locals and us and us with the locals). 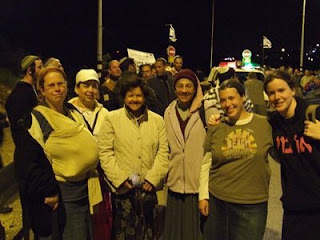 Some of the Anglo women. I'm on the far left and I'm 'wearing' Elchanan. 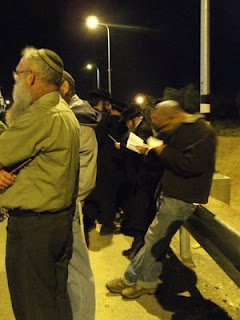 Waiting in the staging area, people from all 'flavors' of Judaism were here to daven. 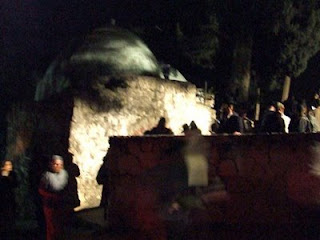 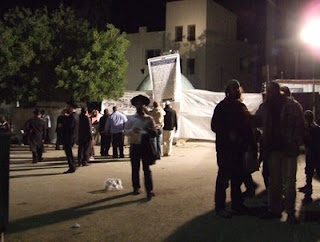 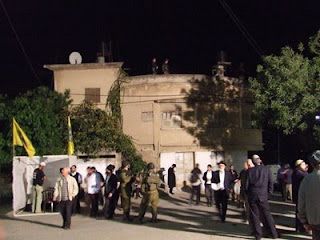 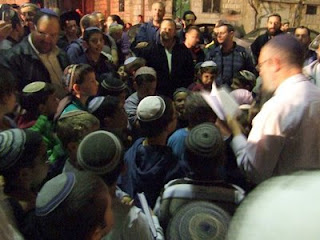 A class of boys who have been learning Sefer Yehoshua came to finish the Sefer and have a Siyum. The Yeshiva is the third grade from the Talmud Torah in Eli.
Posted by Pesky Settler at 8:29 AM 2 comments:

The army is allowing Jews into the village just to the north of Ariel tonight for the yarzheit of Joshua. The village is also the location of the tombs of his father Nun, as well as other 'reconnaissance specialist' Caleb son of Yefuneh.

Opening time after 10pm until about 4:30 in the morning. Whoever is inside at the 'end', can stay for 'vatikin' shaharit prayers.

Best way is to drive/get a lift to the Ariel intersection and then walk in with the rest of the crowd. Warm weather, the last cancellation, and the earlier time mean many more people than past times, so don't feel initimidated by walking in to an Arab village at night.

You might want to take a prayer book/psalms because besides the brief sightseeing, there is really nothing else to do.
Posted by Pesky Settler at 2:22 PM 2 comments:

This Shabbat is the time for the tradition of 'Schlissel (key) Challah' - of baking a key into your Challah and/or shaping the bread like a key.

The tradition is based on the belief that one will always have the key to the Gates of Heaven. It is also thought to be good luck for finding/keeping employment.

What's in a name?

So as anyone who has read the Haggadah knows, there's a chunk of it which discusses the discourse between a bunch of Rabbis...

And it got me wondering about the names... Eliezer, Yehoshua, Elazar, Azariyah and Akivah are all fairly common names, most can be found in TaNaCH and all have rather spiritual meanings, easy to discern.

And then there's the name Tarfon. Does anyone know the etymology of the name? I don't see how it can be Hebrew, since a quick look in my Hebrew-English dictionary shows that most, if not all the words with the root of Tet-Resh-Phay/Pay are rather.. dismal (the most benign meaning I found was leaf or blade). And I can't imagine any mother naming their son whose root meaning is 'prey'.

Ok, Google knows everything and so does Wikipedia... Rabbi Tarfon or Tarphon, (Hebrew: רבי טרפון‎, from the Greek Tryphon) http://en.wikipedia.org/wiki/Tarfon
Posted by Pesky Settler at 10:56 PM No comments:

Last night the cold water pipe in our (landlord's) dud-shemesh burst right at (or in) the wall.

I have been without water since 8 p.m. last night. It is now almost noon.

I still have a kitchen to clean and turn over (freezer was done, fridge still needs to be done). I also have a mountain of laundry.

For whatever reason (testosterone is my guess), rather than call a plumber or a dud-dude to fix it properly, my landlord said last night he'd come out and take a look (he lives in Petach Tikvah).

I sent the girls and NS to Jerusalem for some last bit shopping and the girls are going to get something nice to wear for Chag. I'm home with a very fussy newborn who just wants to nurse and comfort nurse non-stop... which wouldn't be a problem if my landlord wasn't expected any minute.

And the only thing I've done towards cooking is make a menu...
Posted by Pesky Settler at 11:47 AM 2 comments: 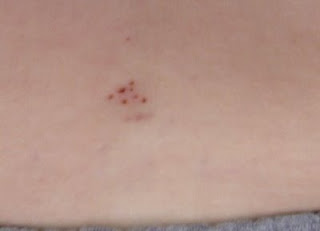 This is what the small of my back looks like a week after EN's birth. The dozen or so punctures are from the various attempts the anesthesiologist made while trying to get the epidural catheter inserted.

In those 30 minutes, I was sitting hunched over, my spine in a 'C', tight against my back. My head down into my chest and shoulders dropped. I wasn't allowed to move at all.

And I was having terrible contractions every 2.5 minutes... my aunt was timing them.

When she finally got the catheter inserted and the midwife told me to lay down, I told her I was ready to push. She checked me and I was at 8 cm... in half an hour, while sitting in one of THE most uncomfortable positions one could possibly labor in, I went from 2.5 cm dilated to 8 cm dilated and ready to push.

Needless to say, I never got any drugs.

Ironically, the Sandman writes about having an 'off' day as an anesthesiologist and while I fully respect him and his profession, it might do him and his fellows some good to pause and consider what their 'off' day means to the person they're going to (trying to) treat.
Posted by Pesky Settler at 2:05 PM 2 comments:

He has a name

Elchanan (which means "Grace of God") is for my husband's maternal grandfather who passed away in September. And we chose Nissim (which means miracles) because he was born between the holidays of Purim and Passover, he was born the day before the start of the Hebrew month of Nissan, the fact that he was a happy surprise and there was a bit of drama during his labor and delivery that we're thankful we got past.

Nati is actually warming up to him. So far he hasn't tried to smack him around.

(The mohel we used is Rabbi Hillel Brenner, an American recently of Har Bracha, currently from Shilo. Really nice guy, did a good job).
Posted by Pesky Settler at 7:53 PM 2 comments: