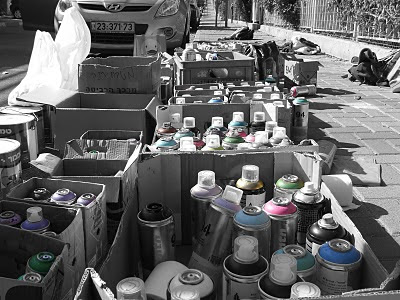 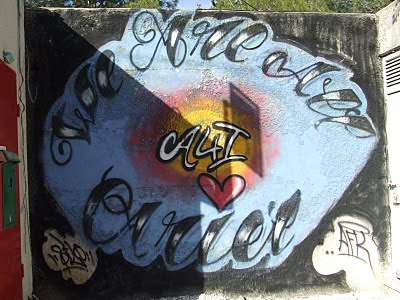 Over the long Thanksgiving weekend, we were visited by Artists4Israel who were kind enough to show their solidarity with Israel and purposefully came out to Ariel to protest against the actors and artists who are boycotting our cultural center since we're in the West Bank.

These are some photos I took. I'll most likely have a few more photos to post on Friday so you'll be able to see the finished murals they did. 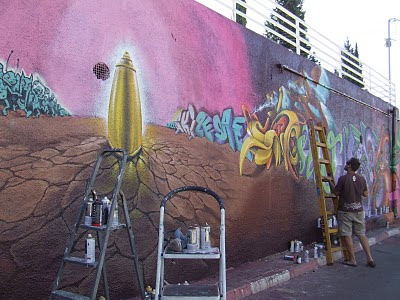 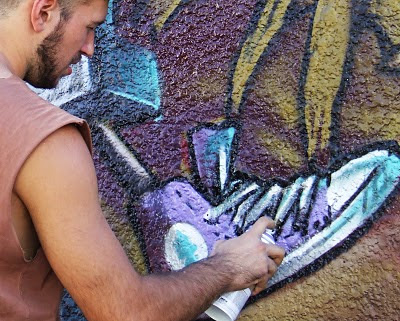 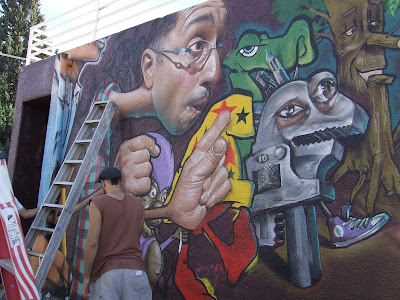 I was scheduled for surgery for Dec. 22nd and was actually in the process of getting the various paperwork approved from the HMO. Wednesday afternoon the ENT calls me and asks me how I'm doing. I told him it felt like my head was going to explode... and this was after 2 fulls days on antibiotics.

He told me that a surgical slot was available for Thursday afternoon and it was mine if I wanted it. I said yes. I may have even said HELL YES.

Then of course there was a flurry of getting things in order - Zach had to arrange to work from home to take care of the boys, I had to email my boss to reassign transcription work that was on a short deadline (yay for that!), after a brief hesitation, I accepted Rechelle's offer to arrange Shabbat meals for us (I was expecting to be home Friday, since I was sent home the day after the previous 2 surgeries but knew I wouldn't be up to making Shabbat) and then packed a small overnight bag.

I had to go to the health clinic the next morning to try the paperwork fast-tracked for approval and by 8:30 I was on the bus. Got to the hospital at 10:30, called the clinic for them to fax over the approval and by noon, I was in my room.

I had the CT done 2 weeks previously and blood work, so I had the CD and printouts ready to hand in.

And then hurry up and wait.

At some point I spoke with the doctors. They expected to do the standard endoscopic sinus surgery but my doctor did say there was a possibility that they'd have to drill into my skull, above my left eye to get to the frontal sinus cavity. He said the CT showed a film over the cavity, but they felt they could clear it the conventional way (via the nasal passage).

I was given a valium at 5:30 p.m., wheeled into the OR around 6 p.m. and after sliding onto the table, having the oxygen mask put over my face and the IV inserted, the next thing I know I'm asking whomever it was that was standing next to me reading my chart in recovery, what time it was.

She said it was 12:30. I touched my forehead and sure enough, there was tape on my left eyebrow... and the left side of my forehead was totally numb. I was back in my room at 1 a.m.

At 8 a.m., my doctor came in and said after trying to get things cleared out from the nose, they had to drill into my head. They found a fiberous mass in the cavity (due to scarring from repeated infections and probably from mucus having no place to drain) which they removed and he placed a sent into the sinus cavity to keep it draining properly. I'll have that for about 2 months. Apparently he had told me this after the surgery, but I don't remember that at all.

He wanted me on IV antibiotics, so that meant... staying over the weekend. Which meant more scrambling to get a babysitter for the boys on Sunday (thanks to Suri's school going to an anti-freeze demonstration, she was able to take care of the boys) and I had to buy toiletries and books and whatnot to last me through Sunday.

Staying over the weekend also meant a skeleton crew so I didn't see my doctor again... but on Saturday afternoon when the doctors were doing their rounds (and talking over me), I found out the surgery went until 11 p.m. and it involved a bit of 'MacGyvering' with regard to the stent and such. There was also a bit more bleeding going on than expected (although I did NOT need a transfusion or anything, thank God).
This morning the doctors tried to convince me to stay for another 24 hours for IV antibiotics, but I needed to get home for many reasons...

My head hurts, but what do you expect and it's not nearly as bad as when I was having sinus pressure headaches, my nose won't stop running and I can't blow it yes, I have little sense of taste or smell and my forehead is still numb... oh yeah, and the hole in my head.

But I'm home with my family and hopefully this will be the end to the sinus issues of the past 18 months.

Now on to planning a wedding.
Posted by Pesky Settler at 12:29 PM No comments:

The newest JPIX is up! 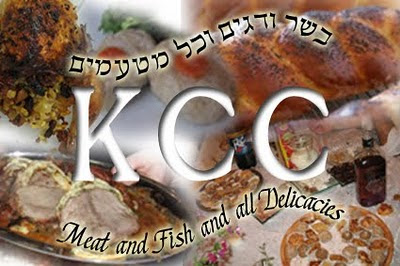 Head over to Around The Island and take a look!

And don't forget to contribute to the next one!
Posted by Pesky Settler at 7:57 AM 1 comment:

One of the things I really love about living in Israel is when there's a simcha, folks tend to pull together and contribute baked goods, salads, quiches and other foods. It makes the whole thing so much more heimish.

The date for the engagement party has been set, the place rented and now it's time to get food organized.

Hey, this is me. Of course it's gonna be about food.

I briefly spoke to AS (my ex-husband), and I'll speak to ABE (Chattan's mom). AS and I think we should make it with real food, as opposed to just desserts and nosh.

AS said he may ask friends to make quiches.

Someone will make either salads or veggie platters.

Any other suggestions and/or recommendations?
Posted by Pesky Settler at 3:35 PM 1 comment: