The JPix Spring Review is up, courtesy of Leora.

Here's a compilation of clips from a documentary called Unattached, about the upper West Side Jewish community.

I'd be interested in seeing the whole thing because just from seeing the clips, I have NO idea what the director, JJ Adler's aim was.

The singles come across as vapid and spoiled (I have a feeling poor Joe is going to have to move if he ever wants to really get married) and the Shadchanim come across as simply blaming the modern world for this breakdown and being archaic in their seemingly single-mindedness in that marriage is the beat-all and end all for any 'proper' Jewish boy and girl (and yes, I realize that is IS their job, but it still comes across as being.. fanatical).
Posted by Pesky Settler at 2:55 PM 1 comment: 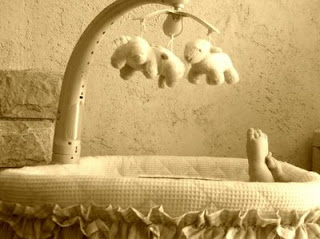 The bolded part is my own... for WTF?????????????????????????????????? I mean it's one thing to accept money and support from Christian organizations whose motives are because they believe the only way to bring about the Second Coming is by having all the Jews in Israel... It's quite another thing to have HAMAS building my house.

The last thing that Abu Mohammed al-Najjar wants is for Israel to succumb to US and European pressure and halt construction in the West Bank settlements.

As far as the 58-year-old laborer is concerned, freezing the construction would be a disaster not only for him and his family, but for thousands of other Palestinians working in various settlements in the West Bank.

Of course, this does not mean that they support Israel's policy of construction in the settlements. But for them, it's simply a matter of being able to support their families.

"I don't care what the leaders say and do," al-Najjar told The Jerusalem Post at one of the new construction sites in Ma'aleh Adumim. "I need to feed my seven children, and that's all I care about for now."

The phenomenon of Palestinians building new homes for Jewish settlers is not new. In fact, Palestinian laborers have been working in the construction business from the first day the settlements began in the West Bank.

Today, Palestinian Authority officials estimate, more than 12,000 Palestinians are employed by both Jewish and Arab contractors building new homes in the settlements.

In some cases, Palestinians have found jobs in settlements that are located near their villages and towns.

Jamal Abu Sharikheh, 27, of the village of Bet Ur al-Tahta, has been working as a construction laborer in Givat Ze'ev for the past three years.

Asked if he had any problem building homes in the settlements at a time when the international community was demanding that Israel freeze the construction work, the father of four also said he was trying to support his family "in a dignified manner."

He and most of the laborers interviewed by the Post over the past week said they had never come under pressure from fellow Palestinians to stay away from work in the settlements.

"If they want us to leave our work, they should offer us an alternative," Abu Sharikheh said. "We don't come to work in the settlements for ideological reasons or because we support the settlement movement. We come here because our Palestinian and Arab governments haven't done anything to provide us with better jobs."

Back in Ma'aleh Adumim, most of the Palestinian laborers said they had no problem revealing their identities.

"We're not doing anything wrong," explained Ibrahim Abu Tair, a 42-year-old father of eight from the village of Um Tuba, southwest of Jerusalem. "We're not collaborators and we're not terrorists. We just want to work."

He said that during the first intifada, which began at the end of 1987, some Palestinian groups tried to stop Palestinians from heading to work in the settlements.

"In the beginning there were threats and physical assaults on some workers," he noted. "But the leaders of the intifada later realized that depriving the laborers of their livelihood would have a boomerang effect on the Palestinians. That's why they allowed the workers to go to the settlements."

"We can't tell the workers to stay at home without providing them with solutions," admitted a Palestinian official in Ramallah. "We're talking about thousands of families in the West Bank that rely on this work as their sole source of income."

Some of the laborers said that boycotting work in the settlements would be ineffective and pointless because their employers would have no difficulty replacing them with Chinese or other foreign workers.

"Look how many foreign workers there are inside Israel today," complained Jawdat Uwaisat, 44, of the village of Sawahreh in the Bethlehem area. "There are about 150,000 workers from different countries who have taken our places of work inside Israel. They are even bringing workers from Thailand and Turkey."

He said that he and his colleagues working for Israelis earn almost three times what they would receive doing the same work for Palestinian construction companies.

"The Palestinian employers pay us NIS 100 to NIS 150 a day," Uwaisat said. "The Israeli companies, by contrast, pay NIS 350 to NIS 450 a day. That's why many of us prefer to work for Israeli companies, even if the construction is in the settlements."

He added that even Palestinians known as supporters of Hamas and Islamic Jihad are employed as construction workers in settlements.

"I know some people from Hamas who work as construction laborers in Ariel," he said. "When people want to feed their children, they don't think twice."

While most of the laborers told the Post that they were opposed to the settlements, they nevertheless stressed that they would continue to show up for work every day.

"If you see how big some of these settlements are, you will understand why the talk about a two-state solution is kalam fadi [nonsense]," commented Iyad Mansour, 55, of the Kalandia refugee camp, who has been working in Ma'aleh Adumim for the past three years.

"These settlements are growing every day at a very fast pace," he said. "One day you see empty land, the next day you see new buildings. They are really fast in planning and building. But who knows? Maybe these settlements will one day become homes for Palestinian refugees."
Posted by Pesky Settler at 11:50 AM No comments:

When we moved to Ariel in August, the owner of the duplex said he and his family were moving to Petach Tikvah for 2 or 3 years, possibly even 4 years since their kids were all going to school in the city. Our lease however was only for 1 year.

Last week the landlord called and said they were moving back August 17th.

Had I known it was only for 1 year, I wouldn't have unpacked a lot of what we unpacked.

My girls were planning a Kaytana in the house for July. That's been canceled too.

So now I'm back to scrambling around to find a place to move to. We saw a gorgeous apartment Thursday, called the owner (who lives in Holon) on Friday and told him we wanted to sign. He said he'd come out Saturday night. At 9:30 p.m., when we still didn't hear from him, I called him. He said he'll be in touch Sunday morning. *I* called him Sunday afternoon. He had signed with someone else that morning. And didn't have the decency to call me.

Do verbal agreements mean nothing to people these days?

ARGH!
Posted by Pesky Settler at 10:08 AM No comments: 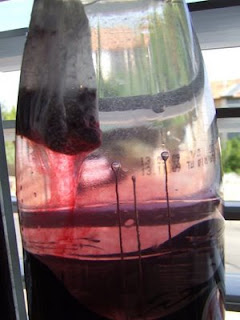 In case you still have NO idea what the photo is, it's a few herbal tea bags in a 1.5 liter bottle of water heading up to our porch for some time in the sun to brew. This cool bubbles are air bubbles at the ends of the tea bag string.
Posted by Pesky Settler at 11:19 AM 1 comment:

My apologies to our esteemed host for posting this so late.. the joys of motherhood and all that...

Beach Blanket Havel Havalim is up and has some really interesting things to click on... including my first HH contribution.
Posted by Pesky Settler at 11:17 AM No comments: 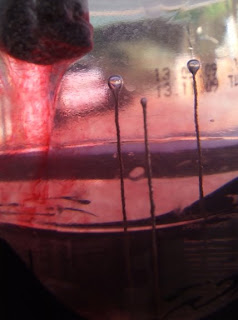 Posted by Pesky Settler at 10:01 PM No comments:

I will most likely buy the new Koren siddur some time soon and while I think it's great that there are PRAYERS for Israel included, I'm still waiting for a Hebrew-English siddur to come out FOR Israel.

Have I lost you yet?

As my husband and I discovered at the Brit of our first son, some things are different when you're in Israel. Like what is said at the Brit. Oh sure, the Brachot are the same but there are several key Piyutim the father needs to say that differs from Israel and the US (and most likely all of Chu'L). Now for someone who can read Hebrew well, that's not an issue. But say the father can't spot-read Hebrew and has been practicing his part from his Artscroll siddur for the past month (because he knew his wife was having a boy) and then is told at the Brit that what he just started saying is wrong. Now faced with having to read unfamiliar Hebrew, he's thrown into a panic and simply forgets pretty much everything he's spent a month learning... Brachot and all.

Needless to say when we found out I was pregnant with our second son I bought him a Hebrew siddur for Israel (happens to have been a Koren edition) so he could learn what needed to be said.

I'm sure there are other things, some more minor than others, that are different.

I also wouldn't mind a Hebrew-English Shloshet Regalim Machzor for Israel either... cut out all that 'second day' stuff...
Posted by Pesky Settler at 12:11 PM 1 comment: