Head over to me-ander and see the wonderful job Batya did.

I think after the holidays I may volunteer to host either a KCC or a JPIX...
Posted by Pesky Settler at 9:40 AM 1 comment:

Posted by Pesky Settler at 10:49 PM No comments: 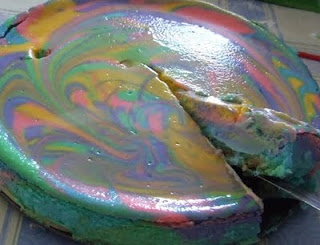 Inspired by Beth's posts regarding the tie-dyed cheesecake she and her family experienced on their vacation to Disneyworld in May and their own attempt to recreate this visually trippy and quite tasty treat in August, I had to make my own.

Except I felt it needed the right touch and frankly, Israeli food coloring just wasn't going to cut it. Besides the fact you tend to need a lot of the food coloring to get even a decent pastel going, the local supermarket has at most 3 colors... and when mixed I'd have 6. But I wanted the vibrant colors Beth had in Disney.

Well, I was in luck. My aunt and 2 of her kids would be visiting from Maryland so I called my brother (who lives in MD) and asked him if he'd be kind enough to get me a basic box of Wilton icing colors. He later called me from the supermarket, informed me he was standing at the top of an entire aisle dedicated to food decoration and candy making and whatnot... I resisted the urge to reply "get me one of everything" when he asked if there was anything else I'd like...

Unfortunately I got my dates mixed up and by the time I called my brother, my aunt was already on her way to the airport. But I was in luck. My brother's BIL was coming to Israel at the end of the summer. So he brought it to Israel and SR picked it up in Jerusalem and I had the final ingredients to make tie-dyed cheesecake... in addition to some really cool tubes of icing... which sparkle! 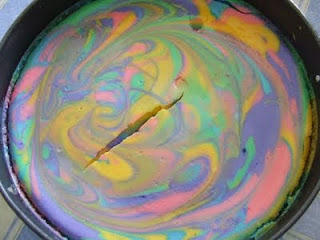 IMO, the actual recipe doesn't really matter, as long as it tastes good, so if you already have a basic cheesecake recipe that works for you, feel free to use it.

I decided to go a bit decadent and use the Philly Northwest Cheesecake Supreme recipe but left out the cherry pie filling and did a few extra steps to make it tie-dyed.

Combine graham cracker crumbs, 3 tablespoons sugar, and melted butter. Press onto the bottom of a 9-inch springform pan. Bake at 325°F (160°C) for 10 minutes.
Meanwhile, combine cream cheese, 1 cup sugar, and flour; mixing at medium speed with an electric mixer until well blended. Add 4 eggs, one at a time, mixing well after each addition. Blend in sour cream and vanilla; pour into 6 or so smaller bowls to add the food coloring.
After each bowl is blended with the color you want, start pouring into the pan - about 1/3 of each bowl, then repeat the process until all the bowls have been scraped clean with a spatula and added to the pan. Very gently swirl the colors together. Be careful not to over mix.
Bake at 450°F (230°C) for 10 minutes. Reduce the temperature to 250°F (120°C) and continue baking for 1 hour.
Loosen the cake from the rim and cool before removing. Chill.
Posted by Pesky Settler at 11:06 AM 3 comments:

Warning: Don't eat or drink while watching this... unless you want to be wiping coffee or cola off your screen.

Posted by Pesky Settler at 3:17 AM No comments:

For the second November in a row, my father in law will be visiting us.

Unlike last year, our toddler's comprehension about The World Around Him is much better and it justifies spending some money on seeing and going and doing. (He'll be 2 1/2 come November).

The zoo... which is better? The Safari Park/Zoological Center in Ramat Gan or the Biblical Zoo in Jerusalem? (And yes, we'll have a car).

The aquarium... is there even another aquarium in Israel other than the one in Eilat?

What other suggestions do folks have? Needs to be suitable for a 2 1/2 year old and I prefer hands-on type stuff...
Posted by Pesky Settler at 10:44 AM 1 comment:

Labels: family, observation, things to do

The latest JPIX is up over at me ander.

Great job, as usual!
Posted by Pesky Settler at 9:53 AM No comments:

KCC has been up

My apologies for linking so late...

Speaking of food, I'm in the process of hashing out my Rosh Hashana menu. Several new recipes are featured such as a chicken dish cooked with apples and leeks and almond-crusted chicken nuggets served with a honey-mustard dipping sauce. I'll also be making apple pie bars and a honey-carrot cake with cream cheese frosting for the shul's pre-Rosh Hashana get together.

One of the tried-and-true recipes I'll be making is a sweet and sour tongue (provided I can get a calf's tongue at the butcher).

Second day lunch will be dairy pot luck with some of the neighbors. Someone is making pasta with sun dried tomato pesto, another family is bringing Greek salad and I'll be making kid friendly potato-sweet potato latkes and maybe apple fritters. At least 2 others families have said they'll be coming. One is bringing drinks. The other, not sure yet. Wonder if any singles will be coming.

And depending on whether I get a key ingredient, I'll also be making a special dessert.

So folks, what's on your RH menu?
Posted by Pesky Settler at 9:28 AM No comments: