Wow.... this 'report' is so lopsided, it's amazing Bob Simon can stand up straight.
Posted by Pesky Settler at 8:11 AM No comments:

Garlic breadsticks, not chopped garlic. And the article had a blurb on Tnuva salmon and onion 5% cream cheese, a third of which was also found contaminated.
Posted by Pesky Settler at 8:44 PM No comments:

As far as I can tell it is the Ma'adanit brand... basically all their frozen pizzas, their chopped garlic and their quiches.
Posted by Pesky Settler at 3:51 PM No comments:

Kol haKavod to Ilana Davita on a job well done!
Posted by Pesky Settler at 7:39 AM 1 comment:

Another view at The View

To her credit, Whoopie Goldberg simply sits through the anti-Lubavitch crap looking rather pissed off. And Joy Behar makes a vague attempt to come to the Lubavitcher defense.

To her DIScredit, Baba Wawa lets the guest go on... I mean really Barb.. you've been conducting hard-hitting interviews since before I was born. You could have taken control of the situation much earlier.

And I gotta ask... what is WITH self-hating Jews and their need to write ridiculous screenplays and directors who are willing to produce these things without any research whatsoever... I wonder if the BBC gets scripts across their desk about how the Anglican Church is burning heretics at the stake in modern-day London... "Smashing idea! Wonder if we can get Hugh Laurie back on this side of the pond if we offer him the role of Bishop... it'll be a step up from playing that annoying Yank he's become popular with..."
Posted by Pesky Settler at 7:43 PM 1 comment:

Or at least it's an attempt at a political post.

Like many folks I availed myself of the little quiz available to see who my views most closely mesh with.

The highest score was 77% with Likud. Then 74% with Israel Beteinu followed closely by Ichud HaLeumi at 72%. Shockingly enough, Kadima came in at 72%. I'm ashamed.

For whatever reason, maybe because these tend to be the Big News Items, the big issues for me are about security and religion.

For security, I have a 95% compatibility with Ichud Haleumi (no surprise there) while having a mere 75% match with Likud and 78% match with Israel Beteinu.

So now we're faced with a bit of a conundrum. The whole religious thing.

What can I say? I grew up believing in the concept/theory/illusion of Separation of Church (religion) and State taught to me in Civics class. An interesting discussion at a shiur I used to attend questioned why Moshe Rabbenu wasn't also tapped to be Kohein Gadol. One of the answers was very to the point. Spiritual leaders play different roles than politicians and things really don't go well when both hats are worn by the same person/people.

And unfortunately I see that today. It seems that many Rabbis in politics tend to whore Halacha out for the sake of getting their projects funded, while those who sit quietly on the side... sit quietly on the side. Who needs that? Either we need strong spiritual leaders who are willing to fight for what is Halachically correct (and whose Masorah would we follow, anyway?), or we use religion as a basic guideline, but go the 'more' democratic way of whatever.

And then there's the question of how to vote... is voting for the smaller party you have more of a connection with a 'wasted vote' because chances are, if they even make it into the government, they'll be so small, they'll be easily brushed to the side - and by not voting for them of course they run the risk of not getting in at all... or do you vote for the party that has a better chance of winning, and whose policies (at least on paper) you can sort of live with?

Ugh. I need some chocolate.
Posted by Pesky Settler at 10:52 AM No comments:

Read more here.
Posted by Pesky Settler at 9:16 AM 1 comment: 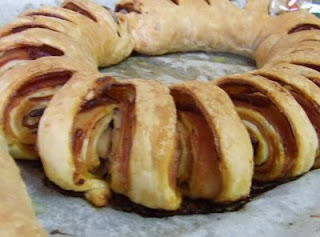 Buy a roll of frozen puff pastry dough. Defrost and cut off a piece. Roll out thinner and spread with your choice of condiments - I use a mix of mayo and yellow mustard (mostly because I can't easily find deli mustard) - the mayo is important as I find it keeps the mustard from drying out and disappearing completely. Other people use a mix of mustard and ketchup, or just ketchup, I made it once with BBQ sauce...

Anyway, then make rows of overlapping deli meat. I tend to buy the inexpensive turkey roll and salami. Feel free to use pastrami, roast beef... ham if you don't keep kosher (cheese too)...

So I make a row of turkey, then salami and alternate. When I roll it up, I make sure to roll it according to the same meat rows instead of the alternating rows. Otherwise when you slice it, you'll end up with mostly only turkey pieces and mostly only salami.

Now I used to simply bake it and it was quite tasty, but the dough inside was always undercooked or raw... so I made the above decorative deli ring by first making slices about 3/4 of the way through then arranging it like a ring and this way the middle gets cooked as well.

Bake at 350 degrees F until the dough is golden brown. (Feel free to do an egg wash beforehand).
Posted by Pesky Settler at 8:03 PM 1 comment:

While filming, Al-Arabiya reporter Hanan el-Masri hears terrorists have fired a Grad missile from underneath the building.

(For english, use closed captions, at the lower right hand side of the screen).
Posted by Pesky Settler at 8:34 PM No comments:

Life in Sderot during the previous ceasrefires...

21 year old Sderot Dana speaks about what it's been like.
Posted by Pesky Settler at 6:27 PM No comments: 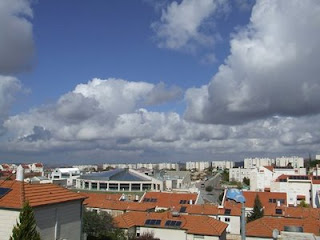 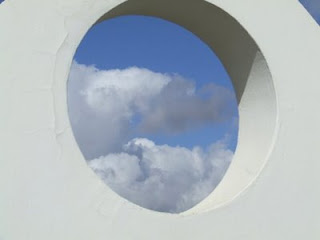 Not quite as breathtaking as what I had before my move, but picturesque nonetheless.
Posted by Pesky Settler at 8:45 PM 1 comment: 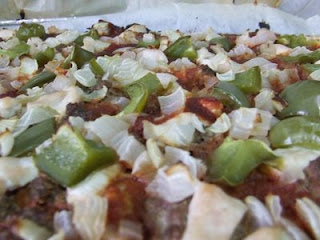 The chicken veggie pizza... it came out quite good - the chicken was NOT too dry... although I did leave it too long on the plata to heat so the crust came out a bit too crunchy... but still...

Mix the flour, yeast and salt together. Add the liquid and mix thoroughly, adding more flour as needed. Knead and let rise for 1 1/2 hours.

Sauce:
small can of tomato paste
some water to thin it out, but not too thin
seasoning: salt, black pepper, garlic powder, oregano

I used chopped meat I had from when I made burgers earlier in the week so it was seasoned with garlic powder and oregano. The veggies I used were diced onions and green peppers... if TC hadn't been with us, I'd probably have used fresh mushrooms as well. I'd though about frozen corn, but changed my mind.

To assemble:
Flatten out the dough onto a cookie sheet or other flat surface. Spread on the sauce. The top with first the chicken, then the chopped meat and finally the veggies. Bake for 20-30 minutes in a 350 degree oven.
Posted by Pesky Settler at 1:52 PM No comments:

Posted by Pesky Settler at 9:26 AM No comments:

A Prayer for every IDF Soldier

A Prayer for Every Soldier

Two modern rabbis are continuing a tradition that Torah sages say dates back 3,500 years ago, when a person was designated to pray and learn Torah for soldiers sent by Moses to fight the Jews' enemies. Jewish tradition states that King David also continued the practice.

The counterterrorist operation "Cast Lead" is being accompanied by "Operation Tefillah, Torah and Troops," initiated by Rabbi Simcha HaCohen Kook, the chief rabbi of Rehovot, and Rabbi Levi Yitzchak Horowitz, the Bostoner Rebbe who now lives in the Har Nof community of Jerusalem.

In an open letter to Jews, the rabbis "ask soldiers and/or their relatives who would want a 'partner' in Torah and Tefillah [prayer] to e-mail maortlmo@gmail.com or fax 972-8-9450027 and give their Hebrew name and mother's Hebrew name without any other particulars such as family name or other identifying factors."

The rabbis will distribute the names "among those who heed the call to add Torah and Tefillah for the sake of those who find themselves in jeopardy."

The same tradition was put into practice in the Second Lebanon War two years ago, when more than 50,000 people participated in the campaign co-sponsored by National Council of Young Israel.

"Every tefillah that is said on behalf of a soldier will make a difference, regardless of where a person may be in religious observance, said Young Israel Executive Vice President Rabbi Pesach Lerner.

"Each soldier who is putting his or her life on the line to defend the land of Israel and safeguard the Jewish nation deserves to have someone praying for their well being and safe return," he added.

http://www.virtualjerusalem.com/news.php?id=4430#
Posted by Pesky Settler at 10:10 PM No comments:

How far could you run in fifteen seconds?

Think of all the normal situations a person can be in during twenty-four hours... think of growing up with this as a daily occurrence for the past 7 years.

Posted by Pesky Settler at 10:43 AM No comments: