It's a good thing my date was such pleasant company because man, did the food suck.

I went to eluna.com to try and find a couple places for us to go. One of the places was a deli called Delicative and based on this glowing review we went.

You'll notice there's no date on when the review was submitted. Because from what we saw, it's a very old review.

I won't get into the aesthetic differences (menu listed meat and a price instead of 'named' sandwiches, no Dr. Brown's) but complain about the food itself and how it seems many Israelis in the food industry expect us to be idiots.

For the record, Zach and I each ordered a beef hot dog and then he had a deli meat type sliced goose breast and I had the corned beef.

The overall fails with this place was the bread, their sandwich making ability, lack of side dishes and WAY overpriced.

The bread: For both the hot dogs and the sandwiches we had a choice of mass-produced commercial baguette or... well, that was it.

For the hot dogs, the baguette was 3 inches too long and for the 'foot long' dogs available (chicken or veal), they're about 3 inches too short. So for the regular beef dogs we ordered, there was just WAY too much bread and it's totally the wrong consistency. They would be better off buying Angel's 'Bingo Buns', which is a very good Israeli version of standard white bread type hot dog buns. You want something that won't get in the way of having to put some effort into biting through the hot dog. If you have to fight first the bread and then the dog, the dog will end up sliding back and you're left with a mouthful of bread.

And for the sandwich... the classic deli sandwich should be served on rye. Which isn't commercially available here, but the standard sliced bread is a reasonable substitution (I don't like carroway seeds or pumpernickle so the lack of either of those things wasn't missed by me). The purpose of the bread in a deli sandwich is so you don't get the deli mustard all over your fingers and to give you something uniform to hold because you SHOULD have about 6 inches or so of thinly sliced meat (and we'll get to what I actually got in a bit).

Sandwich making ability... or actually, it's their lack of ability. First of all, what is with the Israeli fascination with putting everything into these stupid baguettes? I should not be able to order Chinese food in a baguette. A baguette is NOT club bread. And it should NOT be my only option.

And why must they stuff everything between the bread? This isn't pita or a lafa and I'm not ordering falfel or shawarma at the local stand.

So we ordered our hot dogs. To their credit they DID have deli mustard and the sauerkraut was in a warmer. However.. The young woman cuts open the too big baguette, squeezes on the mustard, spoons on the sauerkraut and then... slices the hot dog lengthwise and puts it between the baguette. I suppose this is their way of making sure I don't end up with that annoying 3 inches of beefless bread.

We should have walked out after the disappointing hot dogs (which we had to pay for as soon as we got it even though we were planning on ordering sandwiches next). But we didn't.

So on to the sandwiches. You can't even call these hero or sub sandwiches because again, the bread is all wrong. The crust is way too chewy for it to be a good sandwich bread because everything inside ends up sliding out the back end.

I ordered corned beef. The guy cuts open a baguette and asks me... oh the horror... if I want HUMMUS with it.

Umm.. no. I want deli mustard. That goes on... I asked for cole slaw and that gets slapped into the V of the bread. And then FIVE measly slices of corned beef.

Let me explain something to you about this place. Their deli and hot dogs are from a Kibbutz called Tirat Tzvi which is pretty much the only company that makes commercially available beef deli and beef hot dogs. I can get all this at the deli counter of my local supermarket. Hell, I could have gotten all this at the supermarket 20 meters away from this place with the proper breads and side dishes. And it would have cost me less.

Oh, and there was no sign of a french fry, the only cole slaw was now making my bread soggy and mustard runny and I didn't notice any pickles in the 'toppings' bar. AND, they refused to honor the eluna 10% off coupon. The guy behind the counter said he has no idea what this is, we should talk to the owner who of course, is not there.

I did email eluna, btw and told them about the coupon thing and that they need to have all their reviews time stamped because it seems to me good old Arthur was there when it was owned by an ex-Noo Yawkah who knew his stuff but has since sold it to Israelis who wouldn't know what lean Romanian pastrami was if it bit them on the ass.
Posted by Pesky Settler at 1:42 PM No comments:

From 3:45 until about 4, my son must be on the window bench (and the window and screen must be open) so he can watch the school buses come by, stop in front of our house and spew out half a dozen kids.

I'm worried he's going to end up the neighborhood crazy man who stands by the window with a notepad and pen in hand, writing down the goings on on the street and calling the police every half an hour to report a suspicious looking cat. 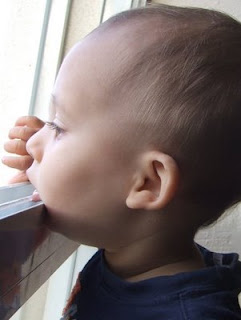 Is that a diesel engine I hear? 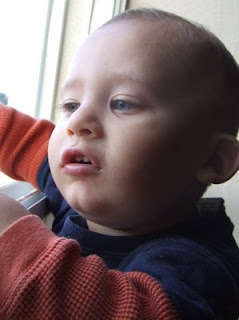 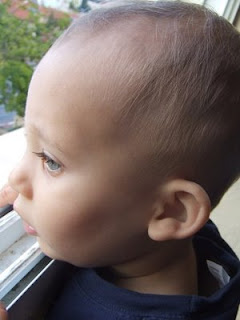 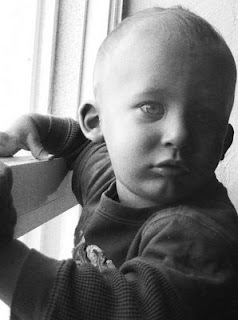 But are you SURE? 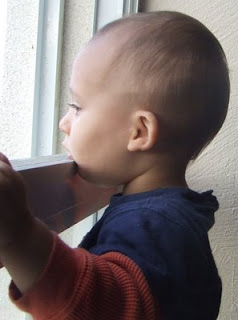 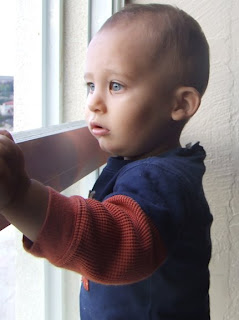 Longing to see the buses...
Posted by Pesky Settler at 8:22 AM No comments:

If you haven't voted yet, PLEASE do so!

If you have voted, please get the word out!! Come on people!

ETA: Click on Evelyn from MA. Her daughter Leah was too young to nominate herself so her mom is doing it on her behalf.
Posted by Pesky Settler at 7:47 AM No comments:

Hopefully the donut making will improve with experience...
Posted by Pesky Settler at 3:00 PM 3 comments: 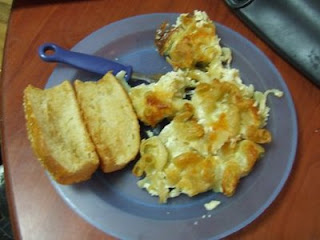 What can I say. Chalk it up to pregnancy cravings. Or watching Iron Chef America - Battle Cheddar... but suddenly, I NEEDED Mac and Cheese.

Preheat oven to 350 degrees. Once you have the macaroni cooked and drained, place in a large bowl and while it is still hot, add the cheddar and mozzarella cheeses. In a separate bowl, combine the remaining ingredients and add to the macaroni mixture. Pour macaroni mixture into a casserole dish and bake for 30 to 45 minutes. Top with additional cheese, if desired. May be frozen for up to 6 months; just make sure it's completely cool before you freeze. Yield: 8-10 servings. 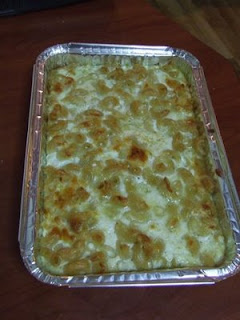 Despite getting off to a wet, gray start, the day did actually pick up quite nicely. The kids and I ventured over to Petach Tikvah and after lunching at Kenyon haGadol, we crossed the street and had some fun at the gorgeous, huge playground. 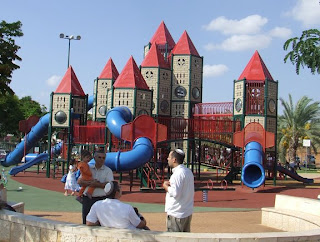 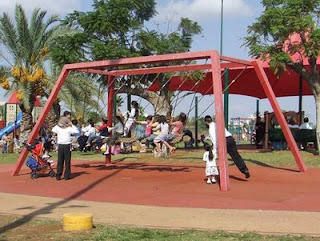 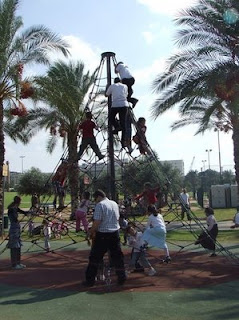 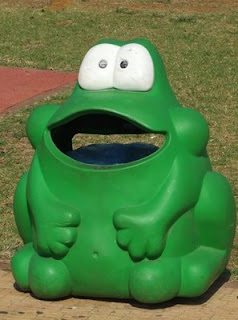 Oh, so you want to see some of my KIDS enjoying themselves... 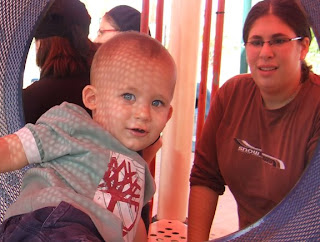 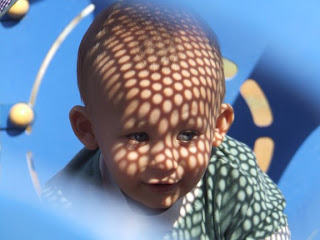 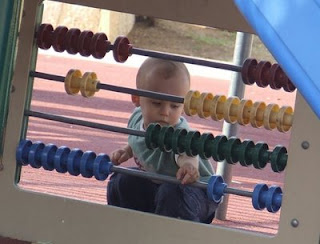 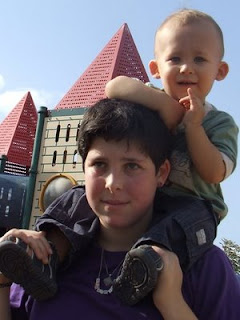 If the baby hadn't been disturbed by his sisters and some random little girl, I think he would have easily spent an hour squatting in front of that abacus.

The place is amazing. It's huge so even though there were a lot of kids, it was never crowded. There's a wonderful balance of toddler to well, as you can see from the climbing rope 'tree', even adults found what to do there.

The only minus, which is an issue I have with just about every Israeli playground I've been to - not enough shade over the equipment. Maybe I'm spoiled. Growing up in Brooklyn, where so many of the trees are well over 100 years old, it's something I grew up expecting.
Posted by Pesky Settler at 8:36 PM No comments: