Last Chanukah, I cooked for our annual SCA 8th Night event which was held in the Old City of Jaffa. When trying to come up with a Rosh Hashana menu, I realized most of the recipes I had used for this feast would be more than suitable for a Rosh Hashana meal or two. The two main courses had dried fruits, honey, wine and spices such as cinnamon.

The first course was Viaunde of Cypress Ryalle (chicken in sweet sauce), Rapes in Potage and a Mince Tarte.

The second course consisted of A Roste (Beef Roast with Crisps), Soldier's Cous cous, Isfanakh Mutajjan and A Tarte of Strawberries.

Don't worry, here are most of the recipes. 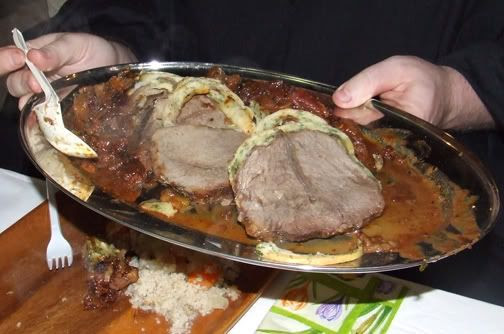 A Roste - Beef Roast with Crisps 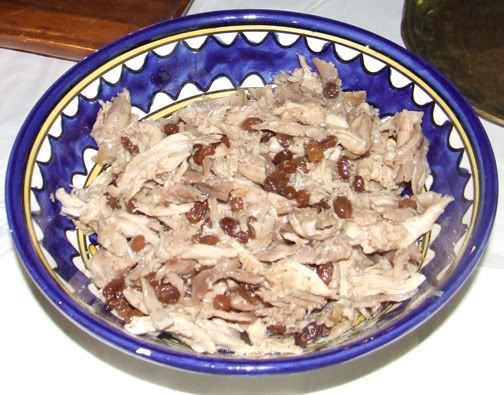 Boil the wine and sugar together for ten minutes or until it thickens and clings to the spoon. Add honey, spices, almonds and currants and cook for an additional five minutes. Pour the sauce over the chicken, coating well. Chill well; serve cold. 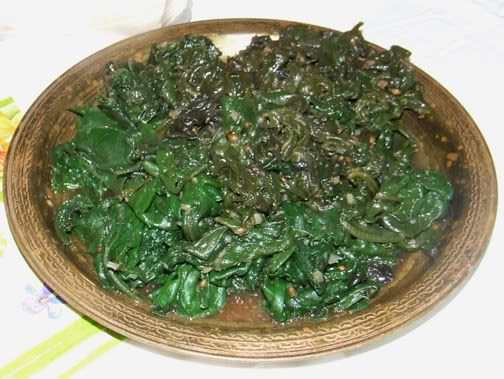 Boil spinach in salted water about 2 minutes.
Take spinach, cut off the lower roots, and wash: then boil lightly in salt and water, and dry. Refine sesame-oil, drop in the spinach, and stir until fragrant. Chop up a little garlic, and add. Sprinkle with fine-ground cumin, dry coriander, and cinnamon. 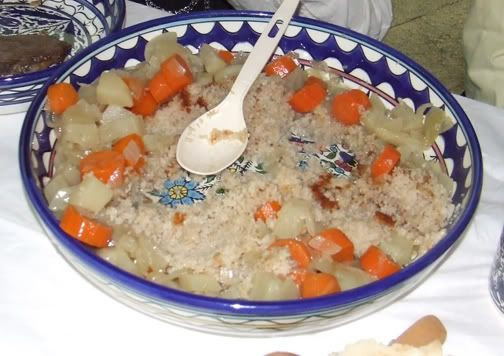 Rapes in Pottage [or Carrots or Parsnips]

Wash, peel, and quarter turnips (or cut into eighths if they are large), cover with boiling water and parboil for 15 minutes. If you are using carrots or parsnips, clean them and cut them up into large bite-sized pieces and parboil 10 minutes. Mince onions. Drain turnips, carrots, or parsnips, and put them with onions and chicken broth in a pot and bring to a boil. Crush saffron into about 1 t of the broth and add seasonings to pottage. Cook another 15-20 minutes, until turnips or carrots are soft to a fork and some of the liquid is boiled down.

Soldier's Cous cous
2 c. cous cous
1 can veggie broth + 1 canful water
4 T. butter
1/4 tsp cinnamon
1 t. salt
In a large pot with a good lid, bring the broth and water to a boil. Stir in the cous cous, and clap on the lid. Let sit off the heat until all the water is absorbed. Stir in the butter and sprinkle heavily with cinnamon.
Fluff with a fork to keep from being gloppy. Serves 6-8 generously. 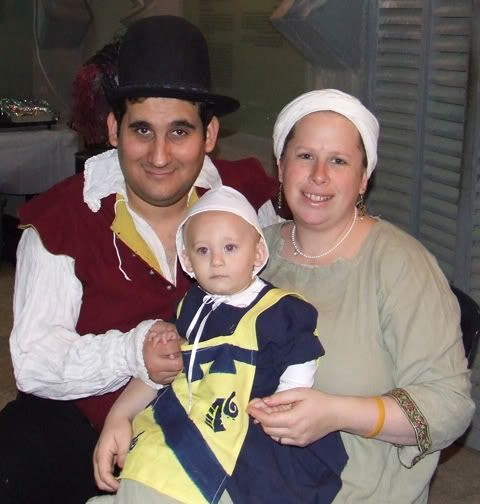 And here are most of the Pesky family at the event. Our son is wearing my husband's colors and his tabard is my husband's SCA coat of arms - blue shofarot on a field of yellow with a diagonal blue band. The blue weird line across the top of the tabard signifies inheriting male heir.

Yeah, we're medieval geeks, what can I say?
Posted by Pesky Settler at 1:01 PM 2 comments: 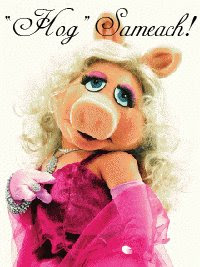 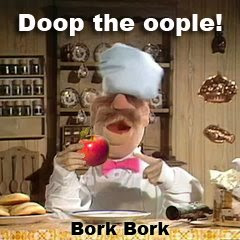 The Jewish blogs are burning the bytes with reports and opinions about Rabbi BenTzion Twerski's resignation from Dov Hikind's task force to investigate the abuse problems in Yeshivot, shuls, camps, etc.

For links to the various articles and for other blogger opinions, follow these links when you have a spare hour or so:

In my opinion, Hikind went about this the wrong way. See, he didn't use any of the popular key words that seems to get much of the Jewish community up in arms and demanding action.

See, if Mr. Hikind had said 'we're setting up a task force to deal with the tznius crisis in our schools, camps and shuls', he would have had Jerusalem and Lakewood and Monsey plastered with Kol Korehs supporting his valiant effort.
Posted by Pesky Settler at 7:44 AM 1 comment:

Whenever I'm out and about on my own with NS and I need to use a bathroom, I head straight for the wheelchair accessible bathrooms because I can push the stroller right in and not have to worry about it being stolen with packages aboard. And of course there's the benefit of not having to take NS out of the stroller.

The times I have had to use the regular stalls, well when NS was smaller, I'd put him in the wrap and do my business. When he got bigger I'd sit him on the floor with paper towels or TP underneath him. When he was standing, he'd walk around the stall and I'd pray he wouldn't discover the small trash can. I'd also have to keep an eye out under the door to make sure the wheels of the carriage didn't move.

At the central bus station, it is now impossible for anyone in a wheelchair or with a stroller to use the bathrooms.

It used to be that up on the 3rd floor, where the departure gates are, were pay bathrooms at either end. Accessible only via turnstile. Tiny one.

Then all the way down on -1 were the free bathrooms and the wheelchair accessible one. Whether it was unlocked, clean and stocked with TP was always hit or miss.

Well now the bathrooms on -1 are being renovated and will have a turnstile added and will become pay toilets. I have my doubts as to whether the turnstile they had there will be big enough for a wheelchair or stroller.

Until those open, they've opened new bathrooms on the 2nd floor. The entrance to which brings new meaning to the word moronitude.

Pay toilets. Ok, I can understand. Turnstile is too small for wheelchair or stroller. But there's a guard sitting right there, in front of a locked door which can give one access to the bathrooms.

Only he doesn't have a key. One of the cleaning people does so you need to go track her down.

You pay your shekel, turn the stile and she opens the door for you.

Where you discover there are no stalls in the ladies room big enough or designated as wheelchair accessible. And it's not in a separate room.

So I had to take NS out of the carriage, bring him in with me and hope no one walked off with my stroller. I finished my business, washed my hands, got NS back into the stroller and headed for the door.

Which was locked... from both inside and out apparently (fire hazard, anyone?). The worker by the men's room was a total idiot by telling my I was stuck or I had to fold the carriage up and carry it, the baby and my packages through the turnstile.

I found the woman with the key and she let me out.

Moronitude, I tell ya.
Posted by Pesky Settler at 4:04 PM No comments: