In December, a couple with four children moved to Ariel from Australia. The children were 9, 7, 4, and 3 (or thereabouts) and they moved just a few houses down from us. The 4-year old was placed in my 4-year old's pre-school class and we all became very fast, very good friends. We would often see one another at drop-off and more often than not, we'd meet at pick-up and lately, since the weather got nicer, we'd hang out at the nearby playground to let the kids let off steam.

The two 4-year olds, the 3-year old and another 3-year old Anglo have become near inseparable.

Which is why, when they told us of their decision to return to Australia, I was heartbroken. And I know my 4-year old is going to miss his best mates terribly.

I came up with this idea for a going away present for them: a t-shirt with the Ariel logo on it (readily available since kids need it for assembly) and then I had the Anglo kids who were closest friends with the Australian kids put their hand prints on the t-shirt in paint. Then I wrote their names in permanent marker. The plan is, once they get settled back in Australia, they'll frame it and hang it. 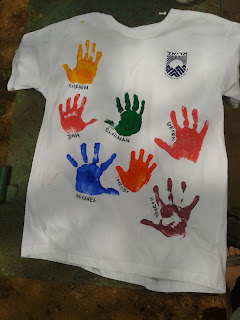 To the Chelom Family,
while you were only here for a little while, your leaving puts a big hole in our lives and in our hearts.
We hope you'll return one day soon, and until then, we wish you the best in Mazal, Simcha, and Bri'ut.
(And you'd better get a Skype account!)

Posted by Pesky Settler at 3:27 PM