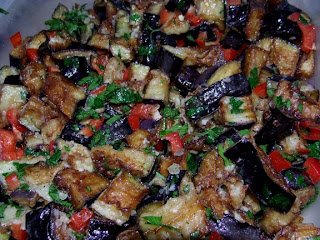 I came into liking eggplant very late. I found this recipe when I worked in the kitchen at the Ulpana in Maale Levona. I basically washed the dishes and chopped veggies and this was one of the salads I chopped veggies for. It's a fairly easy recipe, the only time consuming part is frying the cubed eggplant.*

My apologies for not having amounts but it's a salad - do things according to your own taste.

Dredge the eggplant in the flour, shake off excess flour and fry the pieces until golden brown, turning at least once. Drain on a towel then place into a bowl. Add the rest of the ingredients, toss and chill.

* I have since dispensed with frying and only bake the eggplant. After dredging in the seasoned flour, place on a cookie sheet, toss with some oil, and bake until golden brown.
Posted by Pesky Settler at 9:06 PM