The boys and I went for our daily walk a bit earlier than usual because I needed to buy ingredients for the cheesecake I was planning on making for tonight's women's evening. On our way back I noticed a large insulated bag across the street that looked full.

Now for those of you who have never been to Israel there are a few things you need to know... abandoned bags are taken seriously here in Israel. You're supposed to call the police and often it ends up with the street being cordoned off and a sapper team called in and a little robot rolls up to the bag and sometimes it ends in a boom.

Usually, it's someone's forgotten groceries or lunch or laundry or backpack. Sometimes though it's much more sinister.

Now the truth was, when I saw the bag, I really didn't think it was anything serious but abandoned bags are a serious issue in Israel. So first I called a friend to make sure it's the police I need to call. And then I did. About 5 minutes later a couple of security trucks came by and then for the next hour at least (maybe even more), the street was blocked off while They decided what to do.

How do I know it was an hour?

Because soon after we got home (we only hung around until security showed up) I heard a commotion in the neighbor's front yard.

Now our neighbors have a dog they keep tied up in their front yard. The lead is only about a meter and half long. And the dog is a Shepherd of some sort. And the dog spends about 7 hours or more every day tied up like this.

Needless to say the poor boy is BORED. And like many dogs, he destroys anything he can reach when he's bored. For this pooch, it includes his dog house, the planters and the house's propane gas balloons and the metal connections.

Sunday and Monday it only was the dog house and the metal hood that goes over the gas balloons but today he managed to knock both of them over and disconnect one of them.

Did I mention this is propane?

Unfortunately I don't have any contact numbers for these neighbors (heck, I don't even know their last name) and I couldn't get into the front yard. And I didn't want to stay in the house with two tanks of propane laying around.

So I put the boys back into the stroller and off we went to the center to go to the police station in person and try and get them to help.

On our way there, we saw a police truck blocking the street and I looked back and sure enough, there was the bag I had called about an hour earlier. We got to the police station, I told them what happened with the gas tanks and the woman dispatched someone to take care of it. Just to give them some time though, we hung around for almost an hour before heading home.

Someone had removed both tanks into a corner but the dog had managed to tangle himself up in the metal pipes that feed the gas into the house. I saw there was a latch on the inside of the gate so I opened the gate, untangled him, gave him some water, moved the ruins of his dog house out of the way and ignored the poo and pee.

About 10 minutes later the man of the house came home and when I went outside to talk to him, he was of course blaming it all on the dog and saying they were most likely going to get rid of him.

Which really annoyed me because it's not the dog's fault he's bored.

Oh, and on our way back from the center, we saw this... 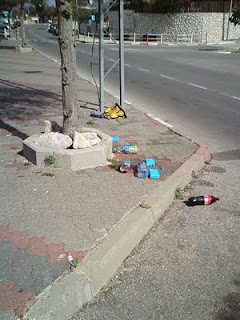 JOOC, for those of you reading this who live in Israel... would you or have you called in a 'chefetz chashud'?
Posted by Pesky Settler at 2:45 PM