This was something I had written 5 years ago. Not sure what was stressing me out so badly around then though...


"This might sound silly to some of you, but I actually had a rather meaningful, therapeutic Challah baking session today.


Since getting the book The Secret of Challah I've really been trying to put more meaning into each step of the process of Challah making.

The sifting of the flour, adding the ingredients (although I don't take it as far as some I've read about who sing and dance as they go, reciting Tehillim and such), the mixing... I use this time to.. well, as Lt. Lenina Huxley said, "enhance my calm".

And after this week, I really needed it.

Apparently more than I thought because as I looked down into this huge bowl of dough I totally lost it. For about 5 minutes I stood there bawling my eyes out as I released the stress of the past few weeks. When I finally calmed down enough, I said the Bracha for Hafrashat Challah, pulled off a piece and began punching the dough down.

I divided the dough into 6 parts, each one to be divided into strands for braiding. The first one, as I rolled the strands, was dedicated to just thanking HaKadosh Baruch Hu for everything.

The second was dedicated to asking Hashem to help people I know realize their dream of becoming parents either for the first time or again. Two strands were dedicated to two specific couples I know and the other two were dedicated to the anonymous members of the various boards and forums.

The third and fourth were dedicated to those who needed healing - physical, mental, emotional.

The fifth was dedicated to my children.

And the final one was for my husband and myself.

I wonder if it will taste different this week..."

This week instead of making six loaves, I made 4, and a batch of garlic knot monkey bread. 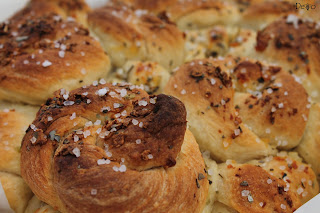 Posted by Pesky Settler at 2:00 PM